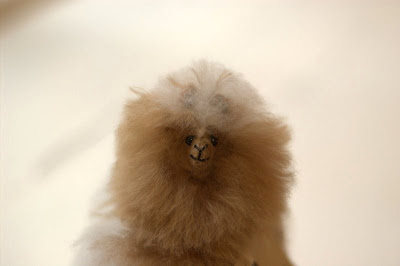 May we introduce JosÃ©? Dixie’s sister found him on a visit to SunCrest Orchard Alpacas in Colorado and sent him over (they’ll sell you a breeding complete herd, too, but we don’t really have the room). Dixie decided that he might prefer to hang out with some sheep in This Is Knit, so that is where he spends most of his time now.

Alpacas are wonderful animals. They’ve been domesticated for thousands of years, to the extent that wild ones don’t exist. They’re South American members of the camel family, along with llamas and vicuÃ±as. Like the latter, their attraction has always been their fibre, unlike llamas which are traditionally beasts of burden. Just as with sheep, different varieties of alpaca produce different qualities of fleece: the crimp of huacaya is most often used for knitting yarn and suri, which has less crimp, is the type most often woven.

Alpaca fibre was once regarded in Europe as unusable. In the 1830s, Titus Salt, who was to become one of the great Victorian benevolent industrialists, found some discarded fleece in a warehouse and experimented on different spinning and weaving techniques. The resulting fine fabric was the basis of an enormous fortune, tremendous humanitarian activities, the model village and mill at Saltaire near Bradford in West Yorkshire and a baronetcy. 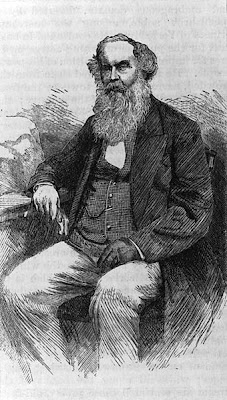 That’s him, with a beard almost as impressive as the seven kilograms of fleece an alpaca can yield.

Alpaca fibre has no lanolin, which means that many people who are allergic to wool can wear it – and knit and crochet with it too. It repels water naturally, and the fibres contain air pockets which make it extremely warm and cosy.

If you fancy trying some out, we have a number of lovely pure alpaca and blend yarns at the moment. There’s a Dublin Dye Company pure alpaca laceweight in the shop at the moment, and both Debbie Bliss Andes and Blue Sky Alpaca offer alpaca blended with silk. If you’d like something really chunky, the generous percentage of alpaca in Debbie Bliss Glen gives the yarn luxury and softness. (If you’re looking for pure alpaca in a heavier weight, you might want to check back here regularly, since there could be an interesting announcement soon. That’s all we’re at liberty to say just now.)

So if you’re in the shop, make sure to seek JosÃ© out. He’ll be thrilled. And if you’re in West Yorkshire, Saltaire, now a World Heritage Site, is well worth a visit too.

Finally, we have a prizewinner for our recent newsletter competition! Fiona, from Dublin, has won a free class of her choice. She’s on Ravelry as fiffles and she writes a beautiful blog called Green Waves. Congratulations, Fiona – we’re looking forward to seeing your new skills in action!